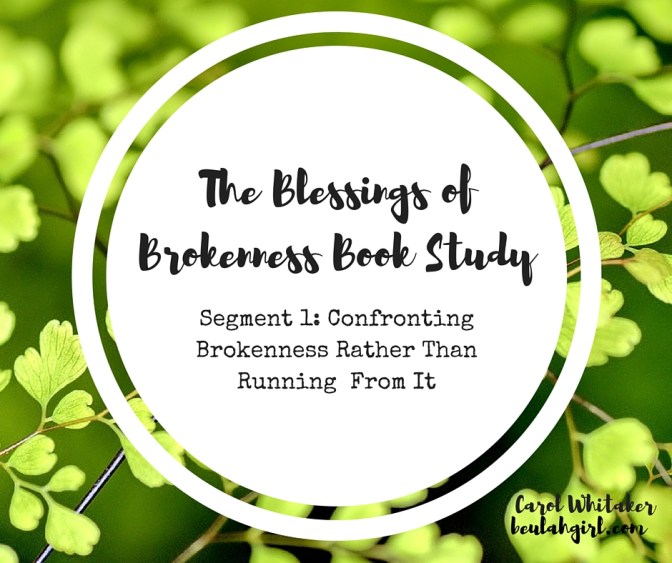 “One of the things I have discovered through being broken … is that after brokenness we can experience God’s greatest blessings … But this blessing comes only if we experience brokenness fully and confront why it is that God has allowed us to be broken. If we allow God to do his complete work in us, blessing will follow brokenness” (The Blessings of Brokenness, 10).

A few years ago, I sat in a small prayer service at my church. While the people around me had upraised hands and cheerful expressions on their faces, I stewed on my pew.

I was angry at God. During the worship and prayer, two continual questions played like a tape recorder in my head, over and over: Why is this happening? Why are you letting me go through this, God? I had never been so confused or doubtful in my Christian walk. Whereas a few months before I had joyfully left my job to follow down a new path at His leading, I had no idea that it would lead to what felt like such chaos and suffering.

Our money had dried up. God hadn’t directed me in a way to replace the income we had lost when I had quit. All of the part-time work I looked into didn’t pay what I needed or would demand too much of my time.

My marriage was hanging by a thread. My husband and I were constantly fighting over finances and this “new direction” I felt I was to go.

My newborn son was difficult and colicky. He cried all the time and added to the tension of our already tension-filled household.

The area I had felt God ask me to step into wasn’t opening up like I wanted. I kept coming up against walls in relationships and opportunities. I made adjustments, worked on my skills, practiced in any spare second I could — but none of that made any difference.

I felt stuck. I knew this was where God wanted me. But why did He want me here? Although I would never admit it out loud to anyone, there was a voice inside that said, This isn’t working. You should give up. I wanted to run away. I didn’t want to follow God anymore if He continued to lead me down this path.

As I wrestled inside with these questions that I am sure everyone around me would find so shocking, there was also part of me that wasn’t completely void of hope. Part of me that knew that I didn’t have any other options. And because I didn’t know what else to do, I walked up at the end of the service to the altar call. There were hardly any people standing at the front of the church. I felt really foolish and silly standing there.

My bad mood hadn’t completely left. I really didn’t think anything would happen in that moment. But as I stood there, I heard the pastor say, “Don’t turn away. Don’t turn away.”

He was on the stage. He wasn’t talking directly to me, but I knew that God had put those words in his head for me. And, who knows?, maybe there was someone else sitting in the congregation — even in the midst of all those people with saintly expressions — who needed to hear that too.

I didn’t get any other answers in the service that day. God didn’t reveal to me the reasons I was going through what I was — but I got the reassurance that God had me on a journey. And that there was a purpose for me in what felt like utter agony and disorder.

The reality is this. As Charles Stanley notes in The Blessings of Brokenness, “Brokenness is not something to be shunned and avoided at all cost. Rather it is something to be faced with faith” (12).

The Israelites had similar grumblings when God led them to the Red Sea. There had been rejoicing and celebration when they left Egypt. They most likely had dreamed of the new land they were going to, laughed when they considered the slavery they were leaving behind. But all of that was a distant memory when they came up against the mighty sea and heard Pharoah’s army behind them.

They were trapped. They had no way out. And they began murmuring and complaining to Moses, “Why did you bring us out here to die in the wilderness?” (Exodus 14:11, NLT). Many of them thought about where they had just come from. Yes, they were slaves in Egypt, but at least they weren’t about to die there. And they wanted to go back. Suddenly this journey they had been so excited about didn’t seem so appealing any longer. Where was God?

And just when they thought they would surely come to an end and be killed by the Egyptians, Moses raised his staff and the waters parted. The people were in awe. Their finite minds had tried to think of all the ways God would deliver them, but all of the options that they were running through most likely were ones that got them out of their situation. They most likely did not include God creating a path through the very body of water that blocked their path.

Perhaps you find yourself in a situation that doesn’t make any sense. All you want is out. You may have made a job change or life change at God’s direction. The change may have been made with excitement and anticipation and then the bottom fell out. Perhaps you encountered relationship difficulties. Perhaps you left behind a supportive staff or department and your new work environment is full of prickly individuals. Perhaps you were once in a situation where you felt applauded and esteemed in your work, but no one is that impressed with your talents at the moment. Perhaps you have health concerns and don’t know what the doctor is going to say next.

And perhaps the questions in your head are the ones I had in the service or the one that the Israelites had when they faced the Red Sea. If so, this study is a great one for you to embark on because I believe God is saying the same thing to you that He said to me a few years ago: Don’t turn away.

That even though everything in you may want to run for the hills — there is a great blessing waiting for you if you persevere and choose not to turn away.

Even though it may not make any sense to us, God’s desire right now may not be for us to get out of our situation but to walk through it.

Questions to Consider: What situation does God possibly want you to confront rather than run away from? What might the blessing be if you stick out whatever hard thing God is asking you to walk through? We’d love to hear from you in the comments.

Book Study: This post is part of a five week book study over Charles Stanley’s The Blessings of Brokenness: Why God Allows Us to Go Through Hard Times. We will have a live chat over chapters 1 & 2 Monday at 9 p.m. EST. To join us for next week, read chapters 3 & 4 by next Friday.