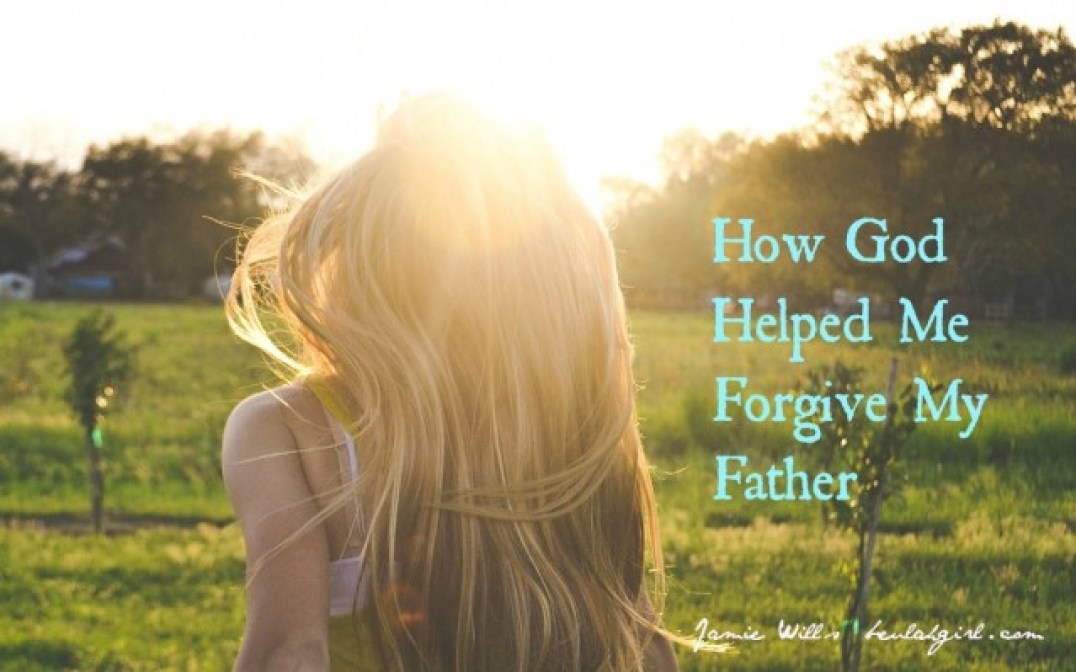 I grew up amidst domestic violence and drug abuse. My most prominent childhood memories are of my father’s violence toward my mother and, on a few occasions, toward me. Needless to say, my childhood was chaotic.

As you might expect, I harbored a great deal of anger against my father. In addition to being abusive, he was anything but affectionate. My father never said to me, “I love you.” Truly, I cannot recall a single tender moment between us.

Instead, I can only recall conversations like the one we had concerning what I planned to do upon graduating from high school:

Me: I need you to fill out some financial aid forms so I can apply to college.

Father: Why? They aren’t going to accept YOU.

Me: My guidance counselor says they will. My grades and test scores are good enough.

Father: You don’t have money to pay for it. They aren’t going to let you go for free. No one’s going to give YOU money.

Me: My guidance counselor says I can get financial assistance and scholarships, but we have to fill out these forms first.

Father: Come on, this isn’t going to work. Be real. You can’t do this. Get married, and start having kids. THAT is what YOU need to do.

After this particular conversation with my father, my anger toward him reached a new level; it was at an all-time high and possessed every fiber of my being.

And then, I found Jesus. I found new life. I found forgiveness.

I knew I had to forgive my father.

I spent time in prayer and asked God to take my anger toward my father from me. I told God, “I forgive him, for everything.” I even prayed for God to reveal Himself to my dad in a mighty way. Surely that was evidence my grudges against him were gone. I had been obedient and forgiven my father of his transgressions!

However, the day I graduated from college, something happened that made me realize I had NOT truly forgiven my father for his abusive past.

As soon as I got my diploma in my hands, my first urge was to seek him out and wave it in his face, and so, that is what I did. Surprisingly, he had come to my graduation, so I didn’t have to go far to find him. Out of all the relatives that had come to see me that day, he was the first I approached. I walked haughtily up to him and announced my achievement while wielding my prized diploma in my hands. I got it as close to his face as I possibly could and proclaimed that I had done it despite him saying I never could.

His response? I saw tears in his eyes, a smile on his face, and he gave me a hug. He said, “Good job, Jamie Lynn.”

It was in that moment I knew I had not really forgiven my father.

In the days after my graduation, the Lord began to speak to me about what it means to truly forgive someone.

To truly forgive someone, you must let go of your anger.

After my graduation day outburst, I realized I was still holding onto a lot of anger toward my father. However, to completely forgive someone, you must let go of your anger.

Ponder this: God let go of His anger toward us. Charles Swindoll’s Insight for Living Ministries puts it like this: “At the cross, God poured out His judgment on His Son, satisfying His wrath and making it possible for Him to forgive us.”

Anger (wrath) has no place in forgiveness. After I had this epiphany, I sought out a way to relieve myself of the anger I was obviously still hanging on to. How was I ever going to “satisfy” my wrath and make forgiveness possible? This brought me to the next component of true forgiveness.

To forgive, accept that the other person is imperfect.

Consider the woman of adultery who was taken to Jesus in John 8. The Pharisees insisted that she be stoned in accordance with the law of Moses, but they asked Jesus what He thought should be done with the woman.

In response, Jesus says to the crowd, “He that is without sin among you, let him cast a stone at her.”

And as the Pharisees walked away one after the other, their anger tempered, Jesus turned to the woman and said, “Go, and sin no more.”

It took some time, but I have learned that to forgive, I must accept a stark reality: the person who sinned against me is not perfect and neither am I. This was clearly the message the Pharisees received that day from Jesus.

It is a message I had to receive from Jesus as well: I was wronged, but I, too, wrong others. We are all sinners in need of a Savior. The acceptance of this reality can temper our anger and make it easier to truly forgive the ones who wronged us.

Jesus saw Mary Magdalene that day. He saw her for everything she truly was, and despite the sin — perhaps, BECAUSE of that — He offered her forgiveness. You see, Jesus didn’t try to dismiss the claims that she had committed adultery or pretend like she wasn’t guilty of what she was accused of. What He did do was turn to the others and ask which of them was without sin — making the point that we should show mercy considering the mercy we’ve been shown. A point that enabled those in the crowd that day to walk away from their anger, leaving forgiveness in their wake.

My anger toward my father slowly dissipated as I came to accept him for who he is — a human with many flaws, with many personal demons, and with many sorrows. Not unlike myself, really. Upon accepting this, I felt I finally had the capacity to truly forgive my father. And although forgiveness does not mean you have to continue a relationship with the person who wronged you, my father and I stay in touch. Only the power of true forgiveness could heal such a broken relationship.

Are you wounded? Friend, let me share with you what I have learned: navigating the wounds of our pasts must begin with forgiveness of those who wounded us.

Jesus, our great physician, wants to help us heal, but to do so, we must obey the doctor’s orders. I can testify that although the medicine may be hard to swallow, the result is a peace that passes all understanding.