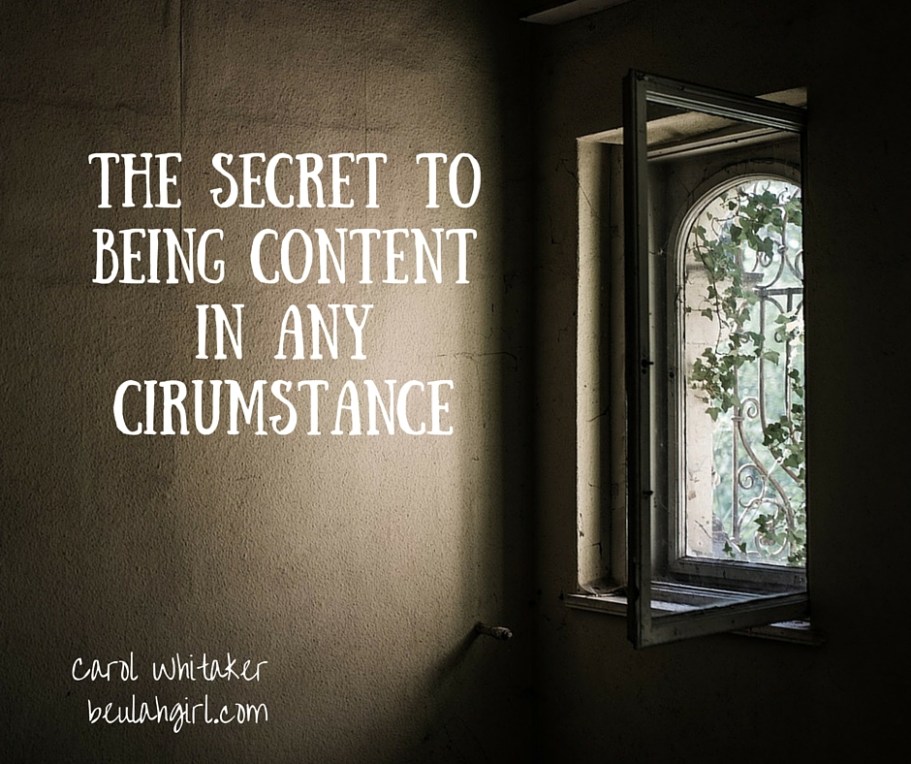 “Mom, our playground is so small. It’s like a baby playground,” my daughter announced as I eased the minivan into the carpool line that snaked in front of her school.

We had recently moved into a new community, and after only a month in her new first grade class, my daughter had been giving me an earful about the inadequacies of her new surroundings: The “baby” playground that did not compare to the one at her old school. The cafeteria that smelled like “stinky green beans.” The public library near our house that didn’t have the chapter books she liked.

She continued, “The only thing I like playing on are the swings, and you only get one turn.”

“And you probably can’t swing that long because everybody else wants a turn, right?” I ventured.

Although I forced a positive tilt in my voice, my shoulders sagged as she conveyed her displeasure over her playground situation. As she walked into school and I drove away, I reflected on the fact that lately I felt frustrated every time I talked with her. Our conversations over the past few weeks had left me feeling like a complete failure as a mom.

Later in my quiet time, I confessed my feelings of mom-inadequacy to God. Why did I feel like I couldn’t connect with my daughter lately? Why was I so irritated and exhausted by her litany of complaints?

As I poured out my feelings to God, I didn’t really expect to get an answer. But almost immediately after I expressed my frustrations, a little question bubbled up in my mind: Is it your responsibility to fix everything?

I pondered over that for a moment and realized that God was helping me pinpoint what was going on: every time my daughter expressed a disappointment, I felt like I had to fix it.

When she complained about anything, my mind immediately went to ways I could smooth over the situation, make it work the way she wanted. Without realizing it, I was equating how I was doing as a mom with her satisfaction level in her environment.

Perhaps this situation presented a lesson not only for me as a mom and a Christian but a lesson that I could impart to my daughter about life.

Yes, I wanted her to be happy, and I wanted to consider her needs, but perhaps I was doing a great disservice by allowing her to grow up thinking that the world could and should be changed according to her demands. Because it couldn’t and wouldn’t.

And perhaps our conversations could be a little less stressful for me if I took the pressure off myself to fix things I couldn’t fix. (Yes, I admit as she was talking I was thinking about how I hoped perhaps the PTA was looking into designating funds for a new playground.)

The Apostle Paul: A Lesson in Contentment

We need only look to the apostle Paul to learn a lesson in contentment. Paul certainly knew what it was like to be in adverse circumstances. In the book of Philippians, Paul is imprisoned in Rome. He had limited mobility, no permanent residence, scarcity in his food supply at times — yet he has this to say:

I know what it is to be in need, and I know what it is to have plenty. I have learned the secret of being content in any and every situation, whether well fed or hungry, whether living in plenty or in want. I can do all this through him who gives me strength. (Philippians 4:12, 13)

The Philippians had sent him a gift but had lamented over the fact that they had not been able to support him recently in the way they had done in the past. With his words, Paul assures them that he is content with little or much. He mentions that he has “learned the secret of being content” (v. 12). His words suggest that he had been learning this lesson over the course of many situations — both lean and prosperous. His secret?

He finds contentment “through” Christ (v. 13). He is able to endure any situation not because of his own strength but because of the strength of Christ who lives within him. As the Pulpit Commentary suggests: “It is only in Christ, in spiritual union with him, that the Christian is … self-sufficient. His presence gives strength to do and suffer all things.”

The self-sufficiency Paul mentions is not a sufficiency of looking to one’s own self, but a “Christ-sufficiency” — an ability to “accept whatever came his way, knowing that his life was not conditioned by either [want or plenty]” (The IVP New Testament Commentary Series).

Not only that, earlier in Philippians 1:12, Paul shares the method by which he measures his situations. He finds cause for rejoicing, even in trials, as long as his greatest mission — to advance the Gospel of Jesus Christ — is being accomplished.

This afternoon I plan to turn what I was seeing as a communication gap between me and my daughter as a communication opportunity: I am going to sit down and read Philippians 4:12 to her and explain that we can be content no matter our situation looks like.

That, yes, I too had noticed some new things I didn’t like since we moved (and had found myself missing our old house and old community in moments), but dwelling on those thoughts had led me to discontentment.

Rather than just considering if our situation brought us comfort or suited our every whim, we could use both Paul’s source of strength and means of measurement by which to approach our circumstance.

God’s words in my quiet time and my later reflection on Paul’s words to the Philippians reinforced to me that the next time my daughter began grumbling, and I felt the urge to do mental gymnastics thinking of solutions, I could relax and just listen.

I could consider whether or not the situation really needed to be changed or if God had us right where He wanted us — living out His will — in a place that didn’t necessarily need “fixing” at all.

Want to listen in to learn more about Philippians 4:12 and chat about the topic of contentment? To join in for a discussion on confrontation, subscribe to our free video chat this Monday, August 1 @ 9 PM EST, or leave a comment below.