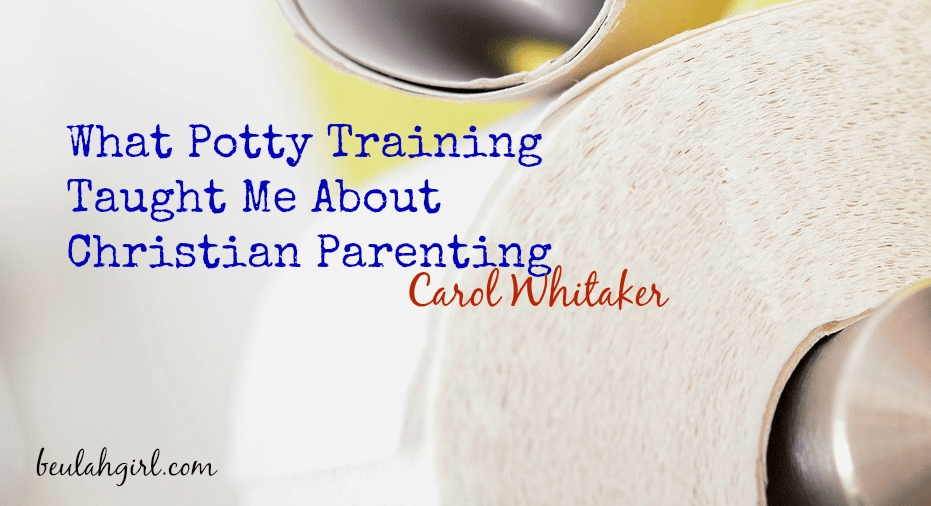 I read in a recent devotional by Mark Batterson that most people have a lot of ideas about how to parent until they actually become parents.

I know that statement has been true of me. I was the person (pre-children) standing in line at Wal-mart watching a father struggle to keep his shrieking child contained to the cart, thinking, “My child will never act like that!”

And then I had kids and discovered my kids are often like that. Parenting is not as easy as it looks, and my kids behave in ways I never thought they would. I am often baffled by my daughter’s sassy mouth and my son’s refusal to eat his dinner. (He would prefer to live off of Goldfish.) I often feel like a failure. Totally ill-equipped.

Take potty-training for instance. When it was time to potty-train my daughter, I really was quite optimistic. I invested in an Elmo potty video, sticker chart and princess potty seat. I talked to her about the process and demonstrated in my most enthusiastic way how to sit on the potty. I remember thinking, “I got this. I was a teacher. I took human development classes.” I am Mommy lion. Watch me roar.

Or watch me wince. Shortly into the “initiative,” my daughter grew very resistant to the process and despite my coaxing and nagging, or perhaps because of it, she announced one day with a scream, “I won’t use the potty!”

Whoa! Where did that come from? Could it be that my incentives, videos, potty seats and altogether awesome parenting just wasn’t working? Part of me just wanted to force it — just make her sit on the potty, punish her when she didn’t do the business. But another part of me felt a little warning. Since the Bible doesn’t have much to say about teaching one’s child to use the commode, I decided to pray and ask God how a godly parent should approach this potty training nightmare. What was I doing wrong?

When I prayed, the word “control” popped into my mind. Control. I was so busy dominating the situation that I wasn’t even really even noticing that my daughter wasn’t learning. She was shutting down.

And I noticed something else. Somewhere along the line I had adopted the philosophy that Christian parenting meant I was big, bad parent disciplinarian at all times. However, this isn’t really Christian parenting at all. While a godly parent may take a stand when her teenager announces he is dropping out of school, say no when the kindergartener asks for an iphone, or insist that her three-year-old eat chicken and rice rather than a Pop-Tart for dinner — it doesn’t mean a totalitarian approach that does not take into account the needs of the child.

A Christian parent is one who constantly considers the special make-up and temperament of her child and works to create an environment that best encourages this child to grow.

What the Bible Says About Effective Parenting

Because I was not aware of what the Bible says about how I was to conduct myself as a parent, I had to do a little study of Ephesians 6:

Children, obey your parents in the Lord, for this is right. ‘Honor your father and mother’ — which is the first commandment with a promise — ‘so that it may go well with you and that you may enjoy long life on the earth.’ Fathers, do not exasperate your children; instead, bring them up in the training and instruction of the Lord.”

You know what I found? Ephesians 6 emphasizes not only that children must honor their parents but that parents are not to “exasperate” their children. “Exasperate” in the Greek means “to provoke to anger” (Strong’s Concordance). Parents have a tremendous responsibility to keep their power in check — not to force submission just because they can. They have a responsibility to not discipline in anger or abuse their God-given authority. And while children have a responsibility in turn to honor parents, parents can make it easier for them to do so by being the kind of patient, loving example God intended.

I will be the first to admit that I am not very patient. It takes a lot to work to be patient, especially when children do careless, irritating things. And quite frankly, children always seem to be doing careless, irritating things. When my daughter simply informs me that she won’t use the potty (not because she can’t but because she won’t), or when my son sneaks cookies when I just told him he can’t have more, I lose all sense of resolve to be patient. I find myself yelling and blaming and threatening.

Here’s the thing: I am not going to be perfect, but I can continually work toward the goal of asking for God to help me be the kind of parent who doesn’t use my power in an unhealthy way. I can work to understand and unravel each of my children and strive to figure out how God hardwired them, using self-control when they don’t react to situations the way I would want them to and keeping my anger in check so they know that I am correcting wrong behavior — not telling them that there is something wrong with them — when I discipline. I can apologize when I blow it and admit that I make mistakes.

Ephesians 6 emphasizes boundaries but also relationship with the child. This style of parenting takes a whole lot more work than screaming incessantly at the kids from the recliner. It requires walking alongside kids as they encounter the various milestones of life, listening to their concerns and allowing them to have a voice. And that is maybe why some parents (myself included) fall so easily into the other method. Tyrannical parenting doesn’t take much work.

With God’s Guidance, I Finally Potty-Trained My Daughter

My first attempt at potty training my daughter failed miserably. I had to give up the endeavor entirely for several months until some of the negativity that had built up around it subsided. We didn’t start again until after her third birthday. This time, I approached it differently — with less pride in my parenting skills and more dependence on the Holy Spirit. I explained to my daughter that we were going to try wearing underpants, but this time I didn’t force her to sit on the potty or get upset at her when she didn’t. I told her the consequences of not using the potty: she would be very uncomfortable in her underwear.

But I let her make the decision. We brought back the incentive system, but this time I tiered the rewards — she got a sticker just for sitting on the potty at first to give her encouragement. This in turn gave way to other rewards for actually doing business. And when she was terrified to go #2, we prayed with her and talked her through it and presented her with a doll as a reward. But we didn’t force it.

The potty training lesson for me was never a lesson about how to potty train my daughter. It was a lesson in how to give up my control and look to God for the best ways to guide and instruct my daughter as she acquired this important life skill. I still struggle to know at times how to parent my children without unfairly manipulating my power. However, my greatest lesson has been to learn that my children are really not mine — they are God’s, and I am being held accountable for how I parent them.