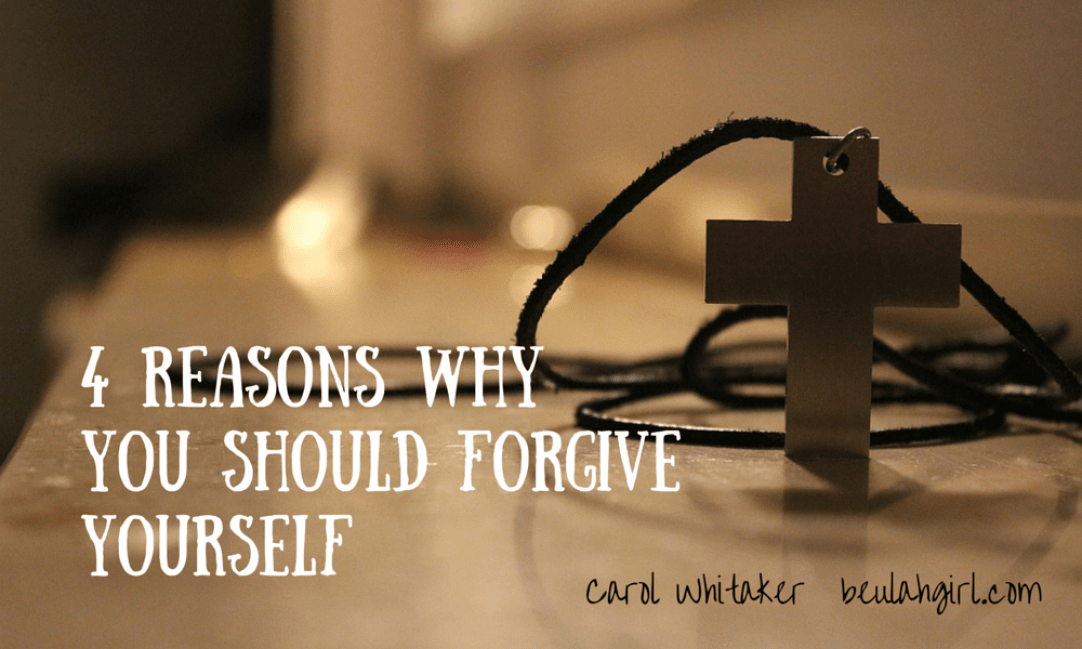 I watched a “Dateline” episode recently where a woman had previously had an affair with the man convicted of killing his own wife. The wife was the woman’s friend. Though she had been cleared of any involvement in the crime, she still felt immense guilt for her involvement with her friend’s husband.

She had this to say: “I will never forgive myself for what I’ve done.”

At one time I would have thought her statement noble. Why should a person forgive herself for getting involved with a friend’s spouse? Like the woman in the “Dateline” episode, I, too, used to hold the belief that I should punish myself for wrongdoing when I didn’t measure up to my own standards. I didn’t think there was anything wrong with being angry at myself. I thought Jesus would want me to be mad at myself when I did something wrong.

But that is actually not what Jesus wants from me or the woman in the “Dateline” episode. Although Scripture talks about a godly sorrow that can lead to repentance (2 Corinthians 7:10) — this is not a continual unhealthy beating up of oneself over wrongdoing.

It wasn’t until a few years ago that I even realized I had a problem with unforgiveness of self. I was sitting in a counselor’s office, and she had me write a list of everyone I was angry at that I needed to forgive.

It turns out, I was on my own list. And I was surprised to discover that Jesus wants me to forgive myself. He advocates that I do — and for several important reasons:

1. Because not forgiving yourself rejects Jesus’ work on the cross.

A verse that has become my favorite is Romans 8:1: “Therefore, there is now no condemnation for those who are in Christ Jesus.” Even though Jesus is clear that we shouldn’t live in sin, and we need to resist sin and temptation, Jesus never expected us to punish ourselves for our sin. He is very clear in Romans that we are under no condemnation for our deeds.

Earlier, in Romans 7, Paul explains that grace doesn’t give us free license to sin — however, when we do fall short and make mistakes, God tells us in His Word that we don’t have to condemn ourselves.

Condemning ourselves rejects Jesus’ work on the cross. He became a sacrifice for our sins. We can brush ourselves off when we fall, ask Jesus to forgive us (and ask forgiveness from others if we need to) and keep going. To continually think about what wrong we’ve done or the mistakes we’ve made and beat ourselves up for them isn’t biblical.

2. Unforgiveness of self leads to relationship problems.

Someone who can’t let go of a past wrong may feel inferior to others and feel “too bad” to be liked by another person. Satan can get his way in and convince us we are so unworthy of relationships that we become isolated — all because we won’t accept what Jesus has done for us. Sadly, not only may we begin to feel not good enough for others, we may convince ourselves that God doesn’t want us either.

However, the idea that we’re not good enough to be loved is a lie that Satan spins to get us out of relationship with others and out of a relationship with God. God is clear that He loves us in spite of what we do! He wants us no matter what we’ve done.

3. Unforgiveness of self can cause health problems.

In a book I reference often in my posts, A More Excellent Way, Henry W. Wright details three ways that we can open the door to what he calls “spiritually rooted disease” — disease that has a root in a relationship breach with God, ourselves or others. Not forgiving ourselves can lead to feelings of shame, self-hatred and low self-worth. Even if we have made a really bad choice and there are earthly consequences for that choice, God wants us to repent and forgive ourselves.

According to Wright, continual negative emotions towards ourselves — rehearsing words of guilt or unforgiveness or shame — can lead to health problems such as lupus, rheumatoid arthritis, diabetes and other autoimmune diseases.

Also, not forgiving one’s self can lead to mental torment — emotional instability, depression, anxiety, and negative thinking. As I was preparing to do this article, I felt that this term “mental torment” kept coming to mind as something I needed to include. The Bible is clear that anger that is not dealt with can give the devil a foothold (Ephesians 4:26, 27), and we will be handed over to tormenting spirits if we choose not to forgive (Matthew 18:23-35).

One reason we may not want to forgive ourselves is because we are so angry at ourselves for what we have done. We may not even have sinned. We may have made a careless mistake that caused great damage, and we can’t get over what happened.

I remember after a significant breakup with another person the feelings of anger I held not only towards the other person but towards myself. I felt like what happened was my fault. I kept replaying scenarios in my mind of what I could have done differently to keep the relationship. I spiraled into a dark depression that lasted for several years — and only when I let go of my unresolved anger and forgave the person and myself did I begin to feel free from the dark thoughts that had tormented me about that situation.

4. Because the Bible says to do it.

One of the reasons I haven’t really known about self-forgiveness until recently is because I didn’t know that this mandate was in the Bible. I had read all of the verses about forgiving others, but I didn’t realize that this instruction about forgiving others also extended to one’s self. Recently, I read an article on a deliverance ministry site I have frequented before, and the author pointed out that the “one another” referred to in Colossians 3:13 in the Greek also can be a reference back to one’s self. The verse is as follows:

Bear with each other and forgive one another if any of you has a grievance against someone. Forgive as the Lord forgave you.

I had skipped over this because I generally don’t make it a habit to study the Greek translation of words — however, “allélón” (the “one another” used in the verse) is a reciprocal pronoun that refers not only to others but yourself.

God knew that we would make mistakes and mess up. Romans 3:23 reminds us that “all have sinned and fall short of the glory of God.” Often, unforgiveness of self makes us feel like we’re the only ones with a problem or broken behavior. The truth is all have fallen short. Because we can’t achieve perfection, God made a plan for us, so that we can be made a new creation, by accepting Jesus’ free gift of salvation.

We shouldn’t abuse that gift by doing whatever we want, excusing bad behavior with, “It’s OK, Jesus will forgive me.” But when we fall into sin, we can call out to Jesus and ask for forgiveness. We were not meant to carry the burden of our guilt or shame. We can give it over to Jesus, knowing that He doesn’t expect us to self-punish or hold unforgiveness against ourselves.

He wants us to confess our sin, accept His forgiveness, forgive ourselves — and move on.

Suggested prayer for self-unforgiveness: Jesus, forgive me for the sin of unforgiveness. I forgive myself for ______________________. Help me to see myself as you see me and not hold my mistakes against myself any longer. Help me to walk freely in the freedom that I am under no condemnation for my sins because of your work on the cross. Amen.