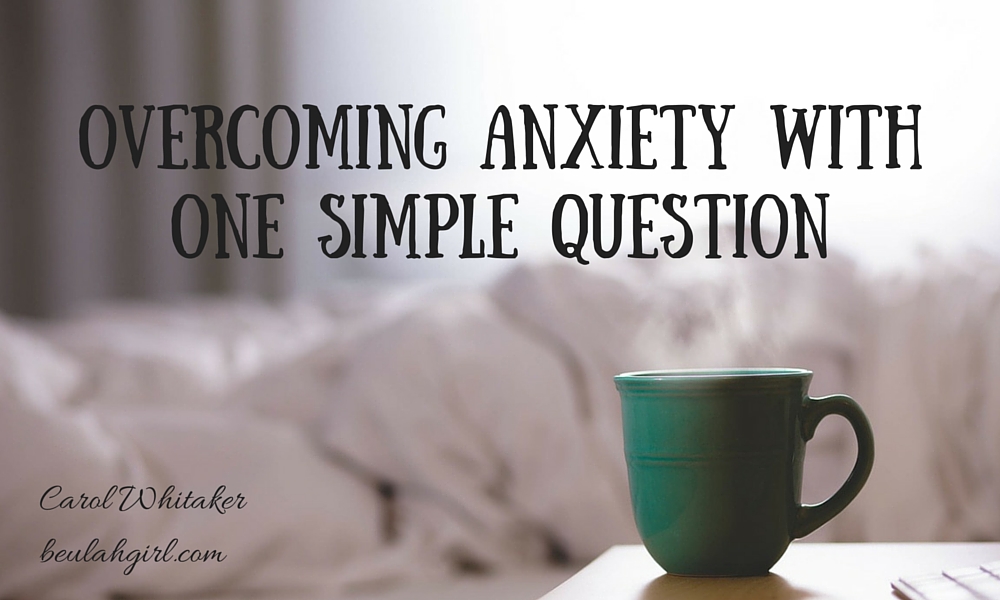 At the beginning of the summer, we put our house on the market.

To get the house ready, we painted, scraped, re-grouted, and deep-cleaned. I was a little tense and snappy with my family during those weeks as I struggled to work on the house and care for my small children at the same time. I felt a little stressed at a few intervals; however, we finished the work to the best of our ability and got the house listed.

After that, I felt some of that tension go away. Of course, the pressure didn’t completely subside. My perfectionistic tendencies were tough to keep at bay as I worked to keep the house looking picture-perfect for the stream of would-be buyers coming through.

About two months into our house listing, we got the promise of an offer. Not only did we get news of one offer coming in, we found out shortly after that that we had a second more generous offer coming in. We were ecstatic. However, our feelings of elation soon tanked after the potential buyers retracted their offer after the inspection and our other interested buyer decided that he no longer wanted the house.

In the week following the broken contract, I started having difficulty sleeping at night. My heart was racing uncontrollably during the day, and I was struggling to control my runaway thoughts. Recognizing the symptoms that had plagued me at other key points of my life, I knew I was suffering from an anxiety attack.

A History of Anxiety

Because I’ve experienced anxiety at other intervals of my life, I know anxiety tends to hit when I am faced with one of the following scenarios: I’m in a season of new when I am faced with a lot of change; I am given a task that I don’t feel adequate to meet; or I sense that someone else doesn’t like me and I perceive (rightly or wrongly) purposeful rejection.

What I learned a long time ago about my anxiety is that it is caused by fear. I generally get anxious when I feel ill-prepared, inadequate or unworthy. These feelings tap into my biggest fears as a person. Therefore, getting a handle on my anxiety in the past has meant being able to identify the underlying fear I am experiencing and asking Jesus to help me with that fear.

For instance, the first anxiety episode I can recall occurred in my college days. My anxiety affected not only my emotional well-being but my physical well-being. I was rail thin. I had digestive problems that had never been diagnosed, but I believe would have been diagnosed as irritable bowel syndrome. I felt jumpy and nervous all the time — and, if you have ever had IBS, you know that it makes your stomach emit weird grumbling sounds at extremely inopportune times. I found this problem could be helped with exercise, but it still made it very awkward for me to sit in quiet lecture halls and classrooms.

In one pivotal spiritual moment one day at church, God told me why I was having the problems with anxiety that I was: I had a fear of failure. When I got this revelation, I knew at the core of me that I was really afraid that I wouldn’t pass my college courses. I didn’t think I was smart enough. I had a high grade point average, but that wasn’t enough to convince me that I wasn’t going to miserably fail at some point.

And I realized something else: I could trust Jesus with my college courses. I could stop worrying about failure and just do my best. And for whatever reason just knowing what fear I was dealing with and the cause of my anxiety in that scenario helped it go away. Once I addressed the anxiety, the digestive problems went away as well.

Anxiety cropped up in small ways again when I moved on into a career in teaching, but I could usually identify the fear behind my emotions and get calm again. And when I later left teaching and had a major episode of anxiety that included a panic attack on a stage — the answer explaining that became fairly clear right after the fact.

The Solution to My Problem

And, just like I have so many times before, because I didn’t know how to make the anxiety stop in this case, I took my question to Jesus, and I asked Him: “God, what am I afraid of?” (Oh, and by the way, Lord, can you make my anxiety stop?)

I didn’t get an answer after that prayer session or even the day after. In fact, a few days went by and then I did receive an answer in a way that I wasn’t really expecting.

My mom had been in frequent communication with me about the house since we had put it on the market. When we lost our buyers, and I told her I was having a tough time, she sent me a text a few days later with a Bible verse she had received from the Lord for me:

For the vision is yet for an appointed time, but at the end it shall speak, and not lie: though it tarry, wait for it; because it will surely come, it will not tarry. (Habbakuk 2:3 –KJV)

After she sent me the verse, I had to meditate on those words. I even went so far as to read some commentary on the verse to help me shed light on its meaning for my circumstance. And it wasn’t until a few days later that what had been an extremely fuzzy situation began to clarify, and I realized something: I did have an underlying fear, and here’s what it was: I was afraid that what God had told me about moving wasn’t going to come true.

And if it didn’t come true, that was very bad for me because I had announced to everyone that this move was God-orchestrated. I had written an entire blog post about how God had directed this move as a deliverance for me out of my situation.

You see, if you look at the Habbakuk verse in context, the verse is written by the prophet Habbakuk for the nation of Israel to trust that God would bring down the powerful Chaldeans and not allow them to destroy Israel. He instructed them not to give up just because it hadn’t happened yet and to wait for God’s appointed time (Matthew Henry Commentary). And not only that, the words indicate a waiting not only for deliverance but God’s counsel, God’s direction.

I was feeling a little like the nation of Israel. I had been given a word of what was to come, but the circumstances with my house not selling speedily were making me doubt that it was going to happen.

Over and over, the phrase from the Habakkuk verse “though it tarry, wait for it” just became one that I began repeating over and over because the truth was, I hadn’t heard a single thing from God since the botched offers. I was worrying that maybe I had missed something. Maybe there was something I hadn’t done right. Worry just consumed me.

This simple phrase from Scripture helped me to stop and reassure myself that God had told us to move. He would have to worry about our house selling and every other detail. And for that moment — I wasn’t to worry or to fear — only wait.

Getting Rid of Anxiety With One Question

Everyone is different. Not everyone suffers anxiety for the same reasons as me. I get that. It may seem a little silly to have a “formula” of sorts for beating anxiety. But I believe that anxiety will be a problem for certain people like me again and again. We may get through one bout but another will come. And, although every time is unique, this situation with my house reminded me of what I had done at other key points when I was experiencing anxiety — the solution I had turned to again this time.

The moment I feel anxiety coming on, I need to do the following: Ask one question of one Person.

The question I need to ask is “What am I afraid of?” and the Person I need to ask it of is Jesus. You see, I couldn’t detect the reason for my anxiety in this most current instance just by asking the question alone. I am not saying that we can’t ever identify our fears or seek help from another wise person or counselor, but for me, I needed to just ask the question of the One who already knew.

One passage of Scripture that has taken on new meaning for me this year is the Samaritan woman at the well passage. She said of her encounter with Jesus: “Come, see a man who told me everything I ever did” (John 4:29).

I believe that not only did Jesus look into her soul and know her deeds without anyone telling him, I believe that He told her the why. That is why she got so excited. He gave Himself as her solution to her deepest soul problems.

The same is true for me and you. Christianity isn’t a dead, has-been religion with a god made by human hands. The Jesus of the Bible is as real and true today as He was for the Samaritan woman at the well. He is the only One who can look into me and see why I do the things I do. 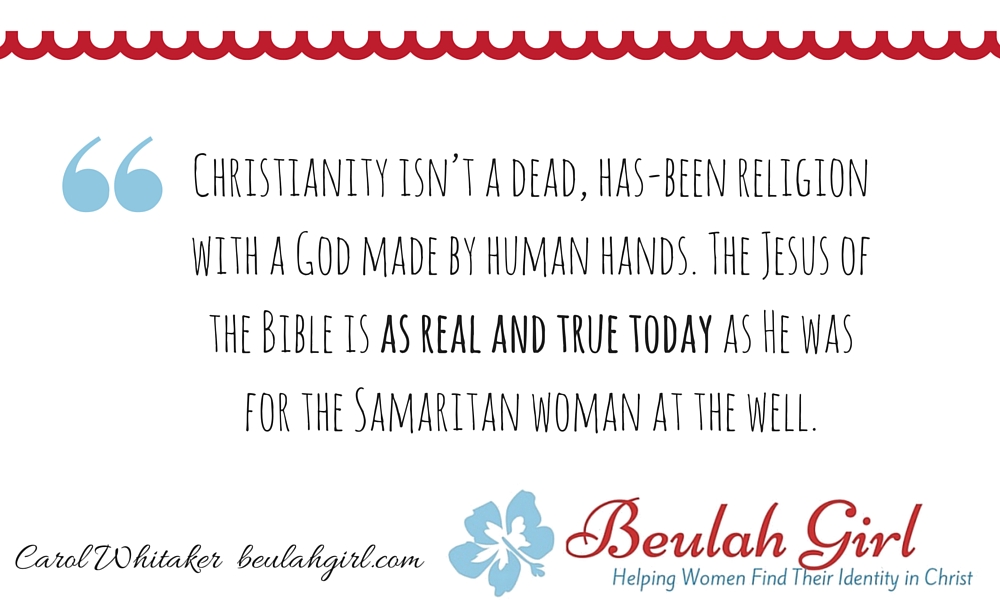 And that why may be the key to overcoming problems in my life I don’t know how to deal with on my own.

Yes, even those making sleep leave my eyes and a tremble invade my heart.

Do you struggle with anxiety? What are some ways that you have been able to cope with fear in your life? Share in the comments below.