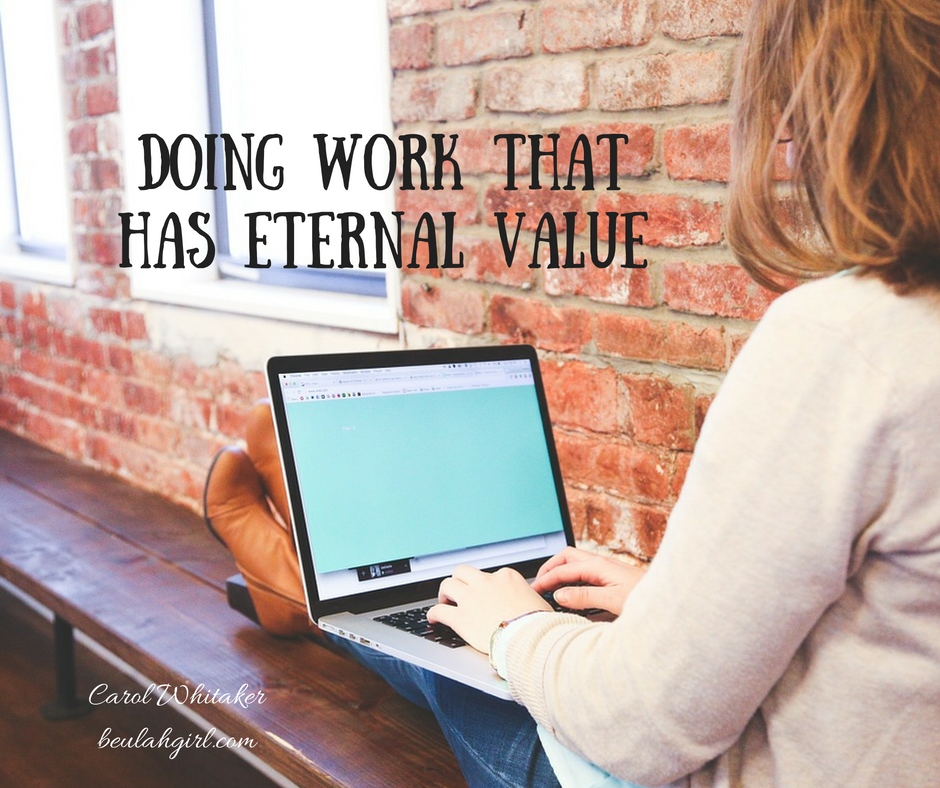 In Percy Bysshe Shelley’s poem “Ozymandias,” the lines describe a traveler who finds the ruin of a statue of a ruler. Stamped on the pedestal are these words: “My name is Ozymandias, king of kings: / Look on my works, ye Mighty and despair!” The words are ironic because the statue, depicting a ruler influential enough to have a statue made, is broken to pieces and sunken in the desert sand. Nothing but a wasteland of barren earth stretches beyond his hand.

The obvious meaning of the poem is that our accomplishments, however great, won’t last forever.

The message of the poem is one that resonates with all of us because there is within the human heart that desire to create or do something significant and important. I remember as a young person reading well-written pieces of literature and looking at famous sculptures and paintings, thinking, “I wish I could something significant like this. Something important.”

However, my definition of valuable work was somewhat skewed. I deemed something of worth if it was esteemed by a great number of people. If it made it into the public arena for some reason.

What Does the Bible Say About Work?

The Bible defines work of value in an entirely different way than you and I might. In 1 Corinthians 3:9-13, it says this:

For we are co-workers in God’s service … . But each one should build with care. For no one can lay any foundation other than the one already laid, which is Jesus Christ. If anyone builds on this foundation using gold, silver, costly stones, wood, hay or straw, their work will be shown for what it is, because the Day will bring it to light. It will be revealed with fire, and the fire will test the quality of each person’s work.

The passage makes a clear distinction right away about the kind of work God wants us to labor in. As verse 9 states, we are “co-workers” with God. To be truly meaningful, our work cannot be an effort of individual willpower. We must rely on God’s help and directive and labor with Him in the process of all we do.

When we fulfill the tasks God ordains us to do and walk in His will, we build on the right foundation using “gold, silver, costly stones” (v. 12). Christ modeled this kind of work when He continually stressed that He only did what the Father told Him to do — and declared that work “finished” when He died on the cross (John 19:30).

In contrast, if we try to build in our own power, our work will not stand the test of time. As Bill Gillham notes in Lifetime Guarantee, our own fleshly pursuits are merely “the wood, hay or straw” that will not last, even if built on the right foundation (v. 12). We can do work that looks good and might even look spiritual, but working without the right motives and not allowing God to work through us will be revealed with fire (v. 13).

Doing Work That Has Eternal Value

A few years ago, when I left teaching and surveyed my years as a teacher, I felt that I had done a good job. I considered myself an excellent teacher. But then I began to get God’s perspective on my time as a teacher and realized I had squandered much of my time and energy on being liked and worshipped by my students. And the hard things I walked through after teaching revealed my career for what it was: mostly a shrine that I had attempted to build to myself.

Yes, there were those moments when I felt God directing me to speak to a student, and I did. And I know that God had me in that particular school. But even as I felt that I was supposed to teach for that particular season, I didn’t take the opportunity to be a godly example to my students or consider how each day could be an opportunity to act out of God’s will. Largely, when God put the magnifying scope on my years in a high school setting, most of what I considered I was crumbled, and the truth emerged that I was more addicted to man’s approval than God’s.

On the other hand, I can think of specific instances in the last few years that have appeared like a disaster from a human standpoint — like I have failed even though I did as God directed. But as time has gone on, those “failures” have begun to look different in hindsight.

For instance, a few years ago, I felt I was to initiate a conversation with some fellow believers about an unhealthy situation they were involved in. It was very awkward for me to bring up the problem, but I felt strongly to do it.

They listened quietly, and as I walked away from that conversation, I knew that I most likely would not be welcome in their presence again. I also did not know if they would accept my advice.

They did not. They continued on down the path they were on. They didn’t say anything further to me but cut off contact with some people we both knew. In some ways, I wondered, God, why did you have me say anything?

However, as time has gone on, I learned more about the situation they were in and how they had gotten in even deeper in an area that God had me address. Though I didn’t see and haven’t seen any signs of a change in either one of them towards separating themselves from their harmful environment, I do know that my words (not mine, but God’s) are true whether they embrace them or not. That even if they choose never to listen or turn away, these words may come back to them at a later time.

Because God’s Word stands whether we listen or heed His words or not. And God has specific works for us to do whether we know it or not.

Ephesians 2:10 states that God has prepared works for us in advance to do. Isn’t that thought amazing? That maybe all we are thinking about today is the sweater we want to buy at Marshalls, the ingredients we need to pick up at the store for dinner — or making it through the day without going crazy with our small children underfoot. But God has eternal plans that He wants to use us for.

Sharing an area of healing we have had with a friend.

Giving a sum of money away to a family in need.

Scheduling a meeting with our pastor to talk about starting a ministry in our church.

Nurturing our children with God’s love and teaching them His precepts.

Whatever small or big thing God may be nudging us to do today, those things are important and significant not because anyone will necessarily see us doing those things, give us an award for doing them, or help push us from obscurity into the public for doing them. Those things are important and significant because God wants us to do them, and they hold eternal value because He promises that those things we do that He directs us in will bear fruit — the kind that we can’t bear in our own strength. The fruit which stands the test of time.

So the next time you are thinking about how you can make your work more meaningful, ask God for His perspective. Ask Him what He would have you do for Him. You just might be surprised by the answer!

Let’s pray: Lord, you know that we want to do things that are meaningful for You. But sometimes we get off track and do things that will bring glory to us or push ourselves into the spotlight and get praise from man. Help us to focus on You and do what will please You and bring glory to You. Forgive us for the ways we have fallen short. In Jesus’ name, Amen.

1 John 2:17: “The world and its desires pass away, but whoever does the will of God lives forever.”

John 6:27: “Do not work for food that spoils, but for food that endures to eternal life, which the Son of Man will give you. For on him God the Father has placed his seal of approval.”

John 15:5: “I am the vine; you are the branches. If you remain in me and I in you, you will bear much fruit; apart from me you can do nothing.”