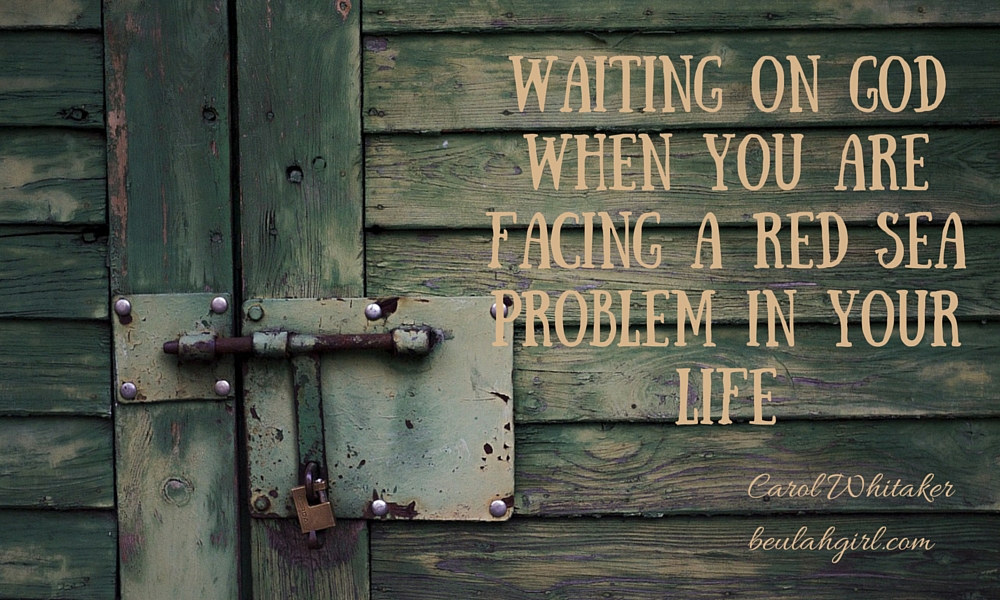 When you have grown up in church and heard certain Bible stories told multiple times, it’s easy to assume you know everything about familiar tales and view them in one particular context.

However, what I have found to be true the last few years is that the Word is truly active. Stories that I thought I knew in and out can have fresh meanings I never considered or understood until I walked through particular circumstances where that story suddenly became one I was living.

One such passage as of late that has become more alive to me has been Exodus 14, when the Israelites left Egypt to escape from Pharaoh and were led up against the Red Sea. The story is one that I have seen illustrated in hundreds of books and heard about in many different sermons. However, I used to see it only from the angle of the miracle-working power of God to deliver His people. And while that is certainly an important thrust of the story, I began to see it from a different perspective recently. I began to see it as a story that could show me what I should do when I encounter situations that look impossible.

A few of the treasures I can glean from this passage:

1. Our circumstances are never bigger than God.

Exodus tells us that the Israelites were led to the Red Sea and there they saw the vast water stretched in front of them, Pharaoh behind them — and they saw no escape.

God had done all sorts of miraculous signs in Egypt to deliver them from Pharaoh’s hand. He sent a pillar of cloud by day and a pillar of fire by night to guide them away from Egypt. He even told Moses, their leader, that Pharaoh would pursue them and God would take care of it. Clearly, He was not going to abandon them at this point in the story. And yet, here, they grumbled and complained because they looked at their circumstances and took their eyes off of God.

I can relate. There are those situations where I can survey what God has done in the past and remember His faithfulness — and yet, I survey the current situation and say, “But God, where are you now? I need you to show up for me now!” And even though I know God has rescued me before and can do it again — I worry that He won’t. 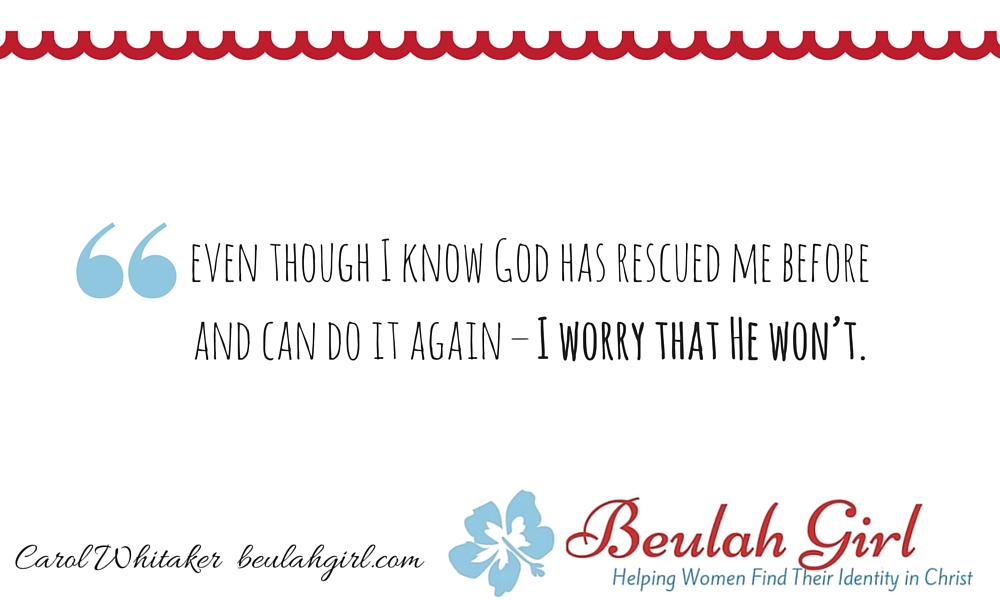 And perhaps most shocking of all, most offensive to human reason is that God may have brought us to the place we are right now. He may have put that obstacle in front of us. As commentator Matthew Henry notes, the Israelites were instructed by God to turn from their route and head towards the Red Sea. A position, mind you, that not only put the sea in front of them and the Egyptians behind him them, but further “penned” them in with Pi-hahiroth, a range of sharp rocks, on one side; and Migdol and Baalzephon, believed to be forts and garrisons, on the other side (Matthew Henry Commentary).

God had a reason for leading them this way. He led them away from Philistine country where He knew that they wouldn’t be ready to handle a battle. But He led them to a place that looked, from a human vantage point, like a dead-end.

However, as Henry notes, they still had somewhere to go and it was “upwards.” He continues, “We may be in the way of duty, following God and hastening towards heaven, and yet be in great straits, troubled on every side … If God himself brings his people into straits, he will himself discover a way to bring them out again.” And although faith translated into action is good and can move obstacles, sometimes God brings us to a place that appears hopeless and asks us to do nothing but wait for Him. We look around in vain for an escape, and we get desperate when we can’t find one.

But God is bigger than any circumstance. He is never thrown off guard or taken by surprise. He knows exactly where we are. If we look at Him rather than the scary obstacle(s) in front of us, we will be able to still ourselves enough to see how He plans to deliver us or hear what our next step is.

2. God can use even our enemies to further His plans.

The other element here that is entirely offensive to human reason is the fact that not only did God put the Israelites up against a Red Sea, He hardened the heart of Pharaoh so that Pharaoh would pursue them. On the surface, this doesn’t sound like the action of a compassionate and loving God.

However, if we look deeper, we see that God did it so that His glory might be displayed. And He used the opportunity to take out Pharaoh and his entire army. While the Israelites viewed their situation as dire, God knew the outcome and wasn’t worried. But the people, again, saw only the circumstances and fretted with great distrust! How many times have I done the same? God has told me something that is to pass but the moment that I find myself in peril, I stop believing! But by doing so I essentially tell God that He isn’t strong enough to save me.

Pharaoh certainly didn’t think God was powerful enough to stop him. While Moses depended on God for the plan, Pharaoh depended on himself and the might of his power and his armies. Even though God had clearly shown Himself to be an unconquerable foe when He brought the plagues on Egypt and even took Pharaoh’s firstborn, Pharaoh did not believe, even after all of that, that God could outmatch him. Hearing of the Israelites’ unfortunate position against the Red Sea, Pharaoh seized on what he thought would be the perfect opportunity to take back the Israelites.

However, he quickly learned the folly of going up against the Almighty. He led himself and his men straight to a humiliating death when God closed up the sea and swallowed up Pharaoh and his armies! And just to add insult to injury, so to speak, Pharaoh’s men even admitted the might of God right before their death. After following the Israelites onto the path into the Red Sea, God took off their chariot wheels, and they said, “Let us flee from the face of Israel, for the Lord fights for them against the Egyptians” (v. 25). Pharaoh must have been a bit irked to hear his men speaking against the wisdom of following the Israelites when Pharaoh was the one who had insisted on the pursuit.

Clearly, what I can see here between the steadfast devotion of Moses and the self-pride of Pharaoh is that trying to do things outside of the will of God is never a good idea.

God can and will use your enemies to forward His own plans. So while our human tendency is to view certain people as blocking our path, making it impossible for us to reach our Promised Land, we can look at this story and realize that our enemies may be key characters in the ultimate story of our deliverance. God hardening their hearts against us may be an act of great tenderness that has to do with His glory.

And while God’s way may just not make any sense to us initially, we can look at Pharaoh and know that however bad things get, we should never attempt to create and lean on our own plans rather than God’s.

3. God may allow your circumstances to strengthen your trust in Him.

One last little nugget that we can find tucked away in the story is that not only did God display His greatness by delivering His people and extinguishing their enemies in one flourishing swoop, He used the circumstance to teach His people to trust Him. After the Israelites looked at all that had happened, verse 31 tells us that “the people feared the Lord and put their trust in him and in Moses his servant.”

I remember going through a particularly challenging circumstance a few years ago where nothing on the outside lined up with the vision God had given me for my life. I was so confused. As I was relating to one of my sisters about this particular season of my life (which is still ongoing in many ways), my sister said this: “Maybe God put you in that situation so you could trust him.”

I really didn’t like that answer but as I’ve thought about it, I’ve had to conclude that she was right. In that time where nothing made sense, and I felt like I was at a dead-end (and I was mad that God had brought me there), I did gain some great gifts from that circumstance. One such gift was that I learned how to better trust God.

So, while this story has everything to do with the unsurpassed power of God that I heard about so often in my Sunday school classes as a child — this story has many other layers as well. It has everything to do with the impossible scenario I find myself in right now. The one I am doubting God can deliver me from. The one that has me losing sleep at night. As Henry notes, in such situations, “Your strength is to sit still (Isa. 30:7), for the Egyptians shall … threaten to hurt in vain.”